How much should I set aside for retirement?

State pensions are due to get a slight rise next April. Under ‘triple lock’ rules, the pension rate is guaranteed to rise by 2.5% each year anyway. However, should there be an increase in average earnings, the highest rate of inflation is taken into consideration and that rate applied. In July this year, a 3.9% growth in earnings was recorded and so the pension rate will be increased in line with it.

This is good news and should see those on a basic state pension receiving £5.05 extra each week or £8.10 for married couples. Those on the new full flat rate introduced in 2016, will receive £6.60 extra each week. However, as pointed out by Steve Webb, a director of policy at Royal London, the removal of free TV licences will offset the boost for many.

The yearly figures, however, are a stark contrast to the UK Retirement Living Standards guidelines published recently by the Pensions and Lifetime Savings Associations (PLSA). Aimed at helping people visualise the retirement lifestyle they would like, the figures were produced by the Centre for Research in Social Policy (CRSP). Taking into consideration their highly regarded Minimum Income Standard developed for the Joseph Rowntree Foundation, the CRSP developed 3 easy to understand standards of a minimum, moderate and comfortable lifestyle.

The 3 levels aim to cover realistic lifestyles and include allowances for all the basics as well as some extras such as holidays, leisure activities and eating out. 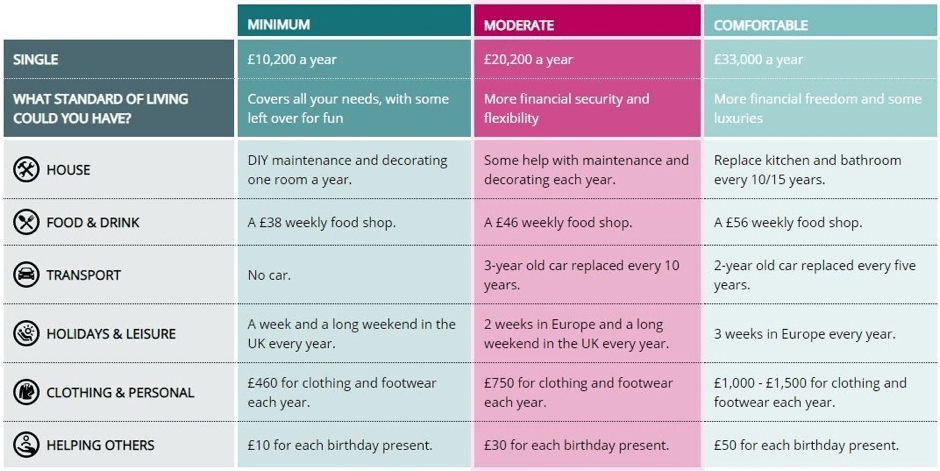 The biggest worry is that the basic state pension doesn’t reach the minimum lifestyle figure and as such will leave many in a desperate state. However, the aim of the PLSA is to help draw people’s attention to what they need to save in order to have the retirement they would like.